Only for kids? Don’t believe it. Milk chocolate in cookies is a preferred flavor in its own right. 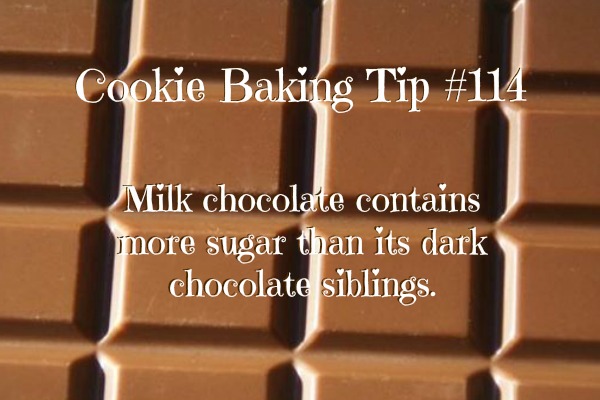 How Milk Chocolate Was Invented

Hats off to the Europeans with this one. Dark chocolate has been around for centuries, but it was Swiss chocolatier Daniel Peter (1836-1919) who understood the need to innovate in order to stay viable in a market dominated by big whig confectioners like Caliller and Suchard.

His good friend and neighbor, Henri Nestle, had developed a process to condense milk for baby food for infants who could not breastfeed. Daniel modified the process for chocolate and introduced his new type of chocolate – made with milk solids (sometimes called “milk powder”) –  to the market In 1875.

Just four years later, he and Henri formed what became the Nestle company.

Among the food conglomerate’s products today, of course, are confections like Nestle’s chocolate morsels.

How Milk Chocolate Is Made

Not with fresh milk, which is about 88% water – and water makes chocolate seize (develop lumps). Dried milk – called milk solids or milk powder, depending on the manufacturer or country of origin – are made by combining sugar and milk and cooking away the water.  Add the milk solids to chocolate liquor or solids and Poof! You’ve got milk chocolate.

As an ingredient in cookie dough, milk chocolate is most often a filler or topping.

Ruth Wakefield allegedly chopped up chocolate bars into chunks and dropped them into sugar cookie dough – or they accidentally fell – giving birth to chocolate chip cookies. Today, that means adding chopped Hershey’s Milk Chocolate Bars as an extra ingredient to cookie dough or sprinkling chopped milk chocolate bars on the surface of bar cookies and letting them melt.

Known for their flat-bottomed tear-dropped shape, Hershey’s Kisses were introduced in 1907 in milk chocolate. It remains the most popular flavor of more than 60 today. The kisses gained popularity as a key ingredient in Peanut Blossom Cookies, a runner up in the 1957 Pillsbury Bake-Off.

Chocolate-coated candies (like M & M’s): yep, the flagship flavor is milk chocolate. And it’s no secret that M & M’s are a favorite in Monster Cookies, Rainbow Rice Krispie Treats, and Christmas Bar Cookies.

12%: that’s the minimum amount of milk solids required for chocolate to be classified as “milk chocolate.”

National Milk Chocolate Day, originated by the National Confectioner’s Association, is celebrated each year on July 28.

The average serving of milk chocolate has about the same amount of caffeine as a cup of decaf coffee.

Kinds of chocolate to use in chocolate cookie recipes ...

How to melt chocolate chips ...

How to melt chocolate wafers ...

© Copyright 2013-2023 by The Cookie Elf. All rights reserved.
No reproduction without permission.