The treats have become immensely popular not only because they are delicious and easy to make, but also because variations of the original recipe abound. (Here's the most popular Homemade Rice Krispie Treats recipe.)

Unlike many happy accidents, the treats were intentionally developed.

In 1928 Mildred Day, a recent home economics graduate of Iowa State University, was recruited to work for the Kellogg Company in Battle Creek, Michigan. Her job was to test recipes in the company’s kitchens and to travel across the country to conduct cooking schools for Kellogg’s customers.

According to Day’s daughter Sandra Rippie, Mildred and co-worker Malitta Jensen created Rice Krispie Treats. Many believe the recipe was inspired by Puffed Wheat Squares, a recipe in Lucy Mary Maltby’s 1938 cookbook, It’s Fun to Cook, with ingredients that included butter, sugar, molasses, puffed wheat cereal, and vinegar. Marshmallows are less sticky than molasses, Day is reputed to have said about the substitution.

Soon after, Kellogg’s was contacted by a Kansas City-area Camp Fire Girls organization, who pleaded for ideas for a fundraiser. Kellogg’s decided to test what it initially called “marshmallow squares” developed by Mildred and Malitta. Day took a train to Kansas City where she set up a temporary kitchen. For two weeks, working daily from 6:30 AM to 10 PM, she made batch after batch of the treats. Meanwhile the mothers of the Camp Fire girls wrapped the bars and the girls sold them door to door.

The original recipe first appeared on the cereal box in 1941 … and continues to do so to this day. 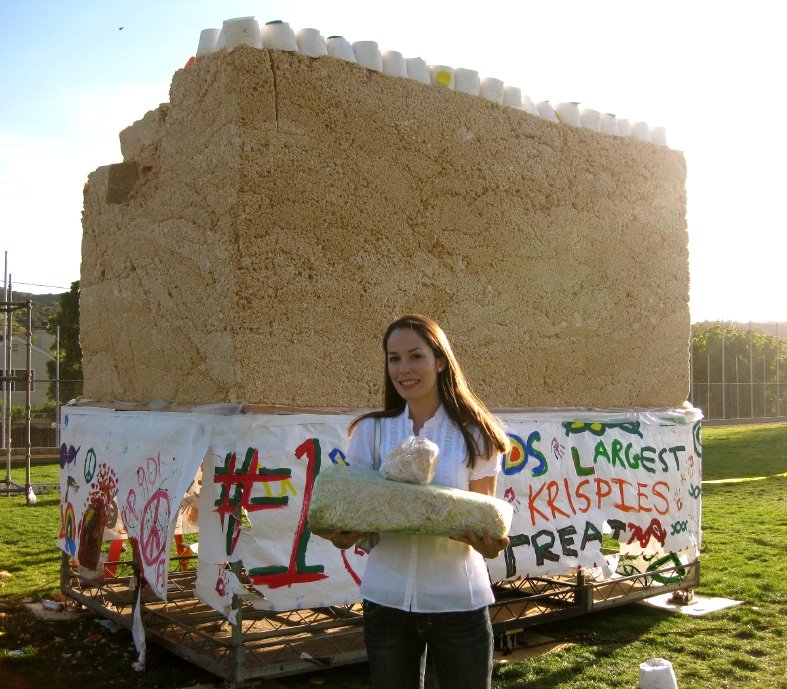 In April 2001, Iowa State University honored Day’s memory by creating the then-world’s largest Rice Krispies Treat. The project took 8 hours to make, created from 818 pounds of Rice Krispies, 1,466 pounds of marshmallows, and 217 pounds of butter. Volunteers made the confection at the university’s Friley Hall kitchen, and poured the mixture into a waterproof Plexiglass form that measured 12 feet long, 6 feet wide, and 2 feet deep. After it was loaded onto a flatbed truck and weighed in at 2,480 pounds, the Treat was featured in the university’s spring parade, then eventually cut into pieces and sold.

The record was surpassed in March 2010 when a team of hundreds of volunteers worked for more than 48 hours to make a 10,460-pound Treat, using 5,000 pounds of Rice Krispies donated by Kellogg's along with 7,000 pounds of marshmallows. Slabs of the confection were auctioned to benefit La Cañada Flintridge Community Center in California.

1928: Rice Krispies cereal is introduced to the public by Kellogg

1941: the recipe for the Treats first appeared on a cereal box

2010:  Current largest Rice Krispie Treat record holder weighed in at 10,460 pounds, made for fundraiser to benefit the Community Center of La Canada Flintridge in California.

© Copyright 2013-2023 by The Cookie Elf. All rights reserved.
No reproduction without permission.