Pumpkin Cream Cheese Brownies are an easy brownie recipe that is perfect for fall.

The brownies are impressive because the swirls look so fancy.  But shhh … don’t tell others that the marbled effect is so easy to do. You mix together a standard brownie recipe and the pumpkin cream cheese filling in separate bowls and drop them separately into the pan.

The trick? Drop a little at a time.  Drop many small amounts of filling on top of the brownie base, rather than large dollops – and then allow some of the filling to peek through the top, too – before swirling through all the layers with a kitchen knife.

This recipe a great way to use up some of that leftover pumpkin from making pumpkin bread, pumpkin pie, and pumpkin cookies. 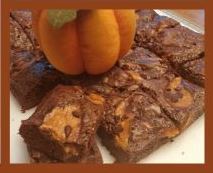 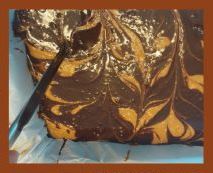 You can use up to 4 ounces (half an 8-ounce package) of cream cheese in the filling.

Filling will mix more evenly if you beat cream cheese first, allowing it to become smooth, and then add other filing ingredients.

Drop small tablespoonfuls of the filling over brownie base (rather than large dollops) so that brownies bake evenly.